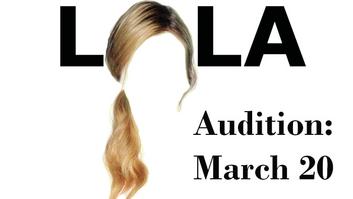 Synopsis
A small town is trying to regain its character.  The town has been a long time mining area with high-wage union workers and a stable population.  The mine is now closing and laying off workers. In its place, a new factory is opening which employs lower-wage employees and migrants.  The town is transitioning from older, long time residents to a younger, multi-cultural population.

Lola is told through the many working-class lyrics and compositions of The Kinks. The story is inspired by real-life events and the hit song - Lola.  The music spans from the mid- 60s through the mid-80s, including many recognizable songs from those years.

Please prepare a song form the playlist.  Accompaniment will be provided

Auditions are by appointment only. Send an email to BrewsterTheaterInfo@gmail.com for an audition time.

Characters:
All roles have singing parts.
​
Walter/Lola (20s - 30’s):
Stuck in a mining town, Walter makes the best of his opportunities.  Works with Tom and Daisy at their once-thriving grocery store. He is looking to make an opportunity for others and himself. Walter has decided to show his true self to David, but can he find the courage to show others? Wears wig during portions of the show.

David Watts (20 - 40):
The son of the local union leader of the mines,  David felt as if he was destined to work in this small town forever. David’s small dreams take him to big places with the help of Lola. He has the talent but lacks confidence. Can he find what it takes to leave the town?

Tom (30 - 50’s):
Co-owner of a grocery store with his wife Daisy. Tom worked at the town grocery store as a kid and then bought it himself.  As the fortunes of the town change, he tries to find a new start.

Daisy (30 - 50’s):
Wife of Tom and co-owner of the grocery store.  Tom fell in love with Daisy when they were young. She is understanding, thoughtful and full of optimism.

Mr. Peters (40 - 50’s):
Union Boss of the mineworkers.  Rugged appearance and commanding nature.  His son, David, didn’t quite fit in at the mines and Mr. Peters has grown resentful at his abandonment and pursuit of other interests.  As the mining company fails, he finds the changes difficult to manage.

Mrs. Peters (40 - 50’s):
Wife of Mr. Peters and life-long resident of the mining town. A first-lady type air about her, she was once the belle of the ball. As the future of the town changes, her outlook and opinions radically change.

Life-long resident and miner.  Serves Mr. Peters faithfully in the mine.

Mr.  Jay (20 - 50s):
Life-long resident and miner.  Close friend of Mr. Peters and Mr. Finch.  The three families are a tight bunch that has laughed and worked together.

Mrs. Jay  (20- 50’s) :
Wife of Mr. Jay and close friends with the Finch's and Peter's.  She is learning to count her money and feed her family after seeing their middle-class life fall apart.

Migrant from the Middle East who has made his way to this small town to start a new life in a brand new factory. He is optimistic about a new start and awaiting the arrival of his family.

Migrant from the Middle East who is making her way to see her husband.  She stayed behind due to expenses and to allow her husband to find a new job and home for their family.